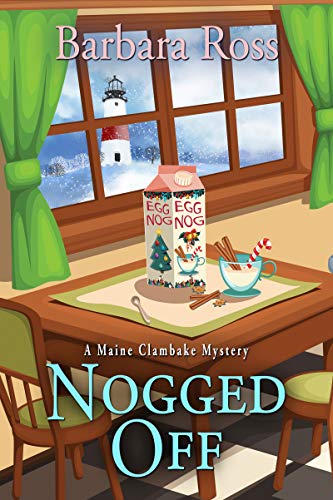 My Review: This was my first visit to Busman’s Harbor, Maine and I am hooked. I have already downloaded several books from the series to my Kindle. Fingers crossed the first one can be used during this most recent round of Book Bingo.

Nogged Off takes place the week before Christmas and starts when Julia goes to NYC to get the rest of her belongings from the apartment she has sublet to Imogen. From the minute Julia enters everything she thought was planned out goes to stink.

The ride is wild and the conclusion is anything but Christmassy.

If you have questioned entering the world of the Maine Clambake series or if this is your first time hearing of the series, Nogged Off is the perfect entry. Bonus: two cookie recipes included in the novella.

I received a complimentary copy from the publisher, Kensington, through NetGalley. Any and all opinions expressed in the above review are entirely my own.

‘Twas the week before Christmas, and Julia Snowden’s escape from New York has just hit a snag. Fresh off accidentally poisoning half her colleagues with her “Killer Eggnog,” Julia’s would-be subletter, Imogen Geinkes, is now jobless and homeless—leading Julia to invite the young woman home for the holidays in Maine. But when they unload the rental truck in Busman’s Harbor, they find something that wasn’t on anyone’s packing list: the body of Imogen’s former boyfriend.

Suddenly, the wordplay in Imogen’s name—“I’m a jinx”—isn’t so adorable. But for all the calamities that follow in Imogen’s wake, Julia’s certain she’s no killer. As Julia digs into the case, the appearance of the ex’s brother—his identical twin—doubles the confusion. Has Imogene been double-crossed by an evil twin? Was the eggnog “accident” no accident at all? If Julia doesn’t unwrap the murderer’s true identity soon, one of the twelve days of Christmas could be her last . . .