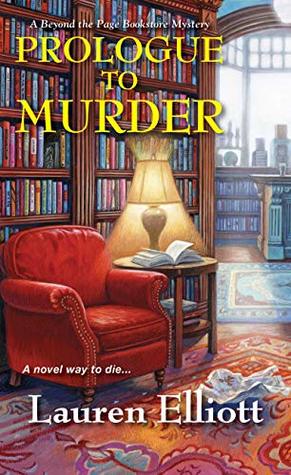 NetGalley: After a career working with rare books at the Boston Public Library, Addie Greyborne is back in her seaside New England hometown—where, unfortunately, murder is not so rare . . .

Gossip columnists love a bold-faced name—but “Miss Newsy” at Greyborne Harbor’s local paper seems to specialize in bald-faced lies. She’s pointed a finger of suspicion at Addie after librarian June Winslow never makes it home from a book club meeting. And when June’s found at the bottom of a steep flight of stairs, Addie’s not only dealing with a busybody but a dead body.

It’s a good thing the guy she’s dating is the police chief. But both the case and her love life get more complicated when a lanky blonde reporter from Los Angeles shows up. She’s trying her hardest to drive a wedge between the couple . . . as if Addie doesn’t have enough problems dealing with angry townspeople. Despite all the rumors, Addie doesn’t know a thing about the murder—but she plans to find out. And the key may lie in a book about pirate legends that June published. Now she just has to hunt down the clues before she becomes a buried treasure herself . . .

My Review: I enjoyed the second book in the series more than the first. I believe it is because I didn’t feel bogged down by background. I got to know Addie and the other characters quite well.

I’m usually not a fan of love triangles but the one between Marc, Simon, and Addie is currently working. Both guys appear to be caring and love Addie to pieces but Addie does need time to fully grieve David. I’d hate for her to make a wrong choice based on rebounding.

A solid mystery with red herrings to keep you guessing until the end.

I received a complimentary copy from Kensington through NetGalley. Any and all opinions expressed in the above review are entirely my own.