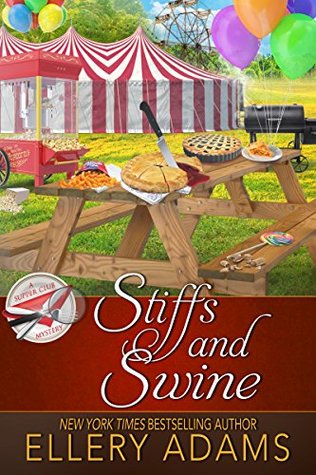 Publisher: Beyond the Page

The Flab Five have been so successful in solving murders around Quincy’s Gap, a local Hog Fest has asked them to be guest judges. The group decides it sounds exciting enough to give themselves the weekend off from dieting and enjoy BBQ and all the festival treats. Unfortunately, murder has followed them to the festival and they decide to solve it if it is the last thing they do.

This was an exciting read from beginning to end. We are starting to get more backstory on everyone in the Flab Five and seeing the true colors of some other characters. This book has a mystery within a mystery for James. He must try and figure out what is going on with the teenagers on Friday nights in the library and help solve a murder. I like how James is evolving in each book. He is coming to realize that he is not only just a librarian. He is a boyfriend, lover, son, friend and respected pillar of the community. Everyone looks to him when help is needed to figure out problems. What a wonderful trait to have that others trust and respect you enough to look up to you.

James’ romance life is still topsy turvy. Don’t be looking for smooth sailing in this book. I have mixed feelings on how things turned out. I cannot talk much as I don’t want to give too much away.

My biggest disappointment…cheese doddles did not make an appearance for the second book in a row. If James every needed comfort with his cheese doddles he needed them at the festival. Yes, I think of his cheese doodles as a character. They are part of who James is and I do not see that as a bad thing.

More yummy recipes are included in the back of the book just in time for a summer BBQ.

I have already downloaded the fifth book in the series to keep up with the Flab Five. Come on weekend so I can delve right back in.

I received a complimentary copy of this book through NetGalley from Beyond the Page. All opinions expressed in this review are entirely my own.