My Review: I am absolutely horrified such a person as Georgia Tann existed. The pain suffered for generations is a tragedy. It’s also horrifying to think she was never officially brought to justice.

While I agree some children went on to live extraordinary lives it still doesn’t change how crudely they were adopted. I do believe you should have the right to your adoption records. I do not know much about adoptions but if there is one thing I hope is learned is that adoption facilities should get detailed health information of the families from the families for the children.

My eyes have been opened and my heart hurts for the Georgia Tann kids. Hopefully, nothing like this happens in the USA again.

I received a complimentary copy from the publisher, Random House Publishing Group – Ballantine, through NetGalley. Any and all opinions expressed in the above review are entirely my own.

NetGalley: The compelling, poignant true stories of victims of a notorious adoption scandal—some of whom learned the truth from Lisa Wingate’s bestselling novel Before We Were Yours and were reunited with birth family members as a result of its wide reach

From the 1920s to 1950, Georgia Tann ran a black-market baby business at the Tennessee Children’s Home Society in Memphis. She offered up more than 5,000 orphans tailored to the wish lists of eager parents—hiding the fact that many weren’t orphans at all, but stolen sons and daughters of poor families, desperate single mothers, and women told in maternity wards that their babies had died.

The publication of Lisa Wingate’s novel Before We Were Yours brought a new awareness of Tann’s lucrative career in child trafficking. Adoptees who knew little about their pasts gained insight into the startling facts behind their family histories. Encouraged by their contact with Wingate and award-winning journalist Judy Christie, who documented the stories of fifteen adoptees in this book, many determined Tann survivors set out to trace their roots and find their birth families.

Before and After includes moving and sometimes shocking accounts of the ways in which adoptees were separated from their first families. Often raised as only children, many have joyfully reunited with siblings in the final decades of their lives. Christie and Wingate tell of first meetings that are all the sweeter and more intense for time missed and of families from very different social backgrounds reaching out to embrace better-late-than-never brothers, sisters, and cousins. In a poignant culmination of art meeting life, many of the long-silent victims of the tragically corrupt system return to Memphis with the authors to reclaim their stories at a Tennessee Children’s Home Society reunion . . . with extraordinary results. 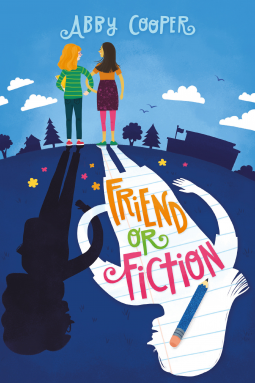 My Review: I can see this book becoming a popular book club read among the middle-grade readers. When reading you feel like you are Jade and feel her emotions so deeply. What she is going through is so common among our children. A sick parent and the life they know is turned upside down.

The magical realism that is part of the plot is used nicely. It didn’t make me cringe as some do. Middle graders will love it. I think my fourth-grade cousin will love this book.

I received a complimentary copy from the publisher, Charlesbridge, through NetGalley. Any and all opinions expressed in the above review are entirely my own.

NetGalley: One creative middle-schooler discovers that the best friend a girl can have is the one she makes herself in this charming magical realism read.

Jade’s life hasn’t exactly been normal lately, especially since her dad’s cancer diagnosis. Jade wishes her family could leave their no-name town in Colorado already–everybody else does sooner rather than later, including every best friend Jade’s ever had. So she makes one up. In the pages of her notebook, she writes all about Zoe–the most amazing best friend anyone could dream of.

But when pretend Zoe appears in real life thanks to a magical experiment gone right, Jade isn’t so sure if she likes sharing her imaginary friend with the real world. To keep her best friend (and even make some new ones), Jade learns how to cope with jealousy, that friends should let friends be true to themselves, and that may be the perfect best friend doesn’t exist after all.